Rowena Comrie has worked as a professional artist for the past 30 years; in january 2010 she relocated from Aberdeen to Glasgow where she now works from Glasgow's Gallowgate Studios.

She was born in Southend-on-Sea, Essex, and in 1982 completed her BA(Hons) in Fine Art at Reading University where she embraced expressionist colourfield painting with confidence and passion.

She continues to develop this dramatic and emotive painting style saying,

"I make these works from a specific aesthetic point that personally expresses sublime elements of human experiences.  Over many years I have refined and developed my technique, a process that continues to challenge and intrigue".

Comrie also works figuratively and sculpturally, and has produced a body of work over the past five years that pursue the concept of the sublime using flight as her subject. These works are contemporary examples of the 18th century idea of the sublime, portraying drama, terror, excitement and danger:. They use Flight as an explicit metaphor for the sublime, as an example of the sublime transcending the limits of the human condition.

Rowena Comries's full CV can be downloaded below: 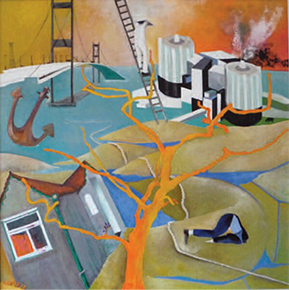